The Place It shouts Fast Food, with less fats! Vegan Burg first opened in Singapore back in 2010, today there are 4 Burgs in town to help serve its growing Vegan fanbase. The MBFC branch was not crowded during tRP visit on a Friday night, but do expect crowds during lunch hours for its CBD branches (MBFC & Golden Shoe). While it is a fast food concept, the restaurant has a laidback Australian vibe to it, which makes dining-in a rather comfy experience.

The Food Don’t expect meat. Everything from its patty to the fillings to the sides, are Vegan. The patties are made from soya beans and mushrooms, which are proclaimed to be non-GMO (Genetically Modified Organisms) – whatever that means. Expect self-service for the food you ordered, which will be served at the counter in seemingly lookalike SAF mess tins. Every burger order can be upsized into a meal with a S$3.90 top-up, which will include drink and 100% organic seaweed fries (which was not available during our visit, wonder why).

tRP was fortunate to be able to try a couple of the Burgs off the menu, including the Creamy Shrooms (S$7.90) – which ought to be the best Burgs at Vegan. If you are a lover of mushrooms, this will definitely get you coming back for more!

Another recommended Burg will be the Smoky BBQ (S$7.90). The patty has been prepared in a oven-baked manner, unlike the deep fried patty of the Cream Shrooms.

Like all fast food restaurant, Vegan Burg also has a series of seasonal burgers or “Limited Edition” Burgs as they would prefer to call them. The edition during our visit was the Lemongrass Curry Burg (S$6.90). While a good seasonal addition to the menu, it fails to live up to the “sizzle your way in every bite” slogan the edition was supposed to do as advertised. 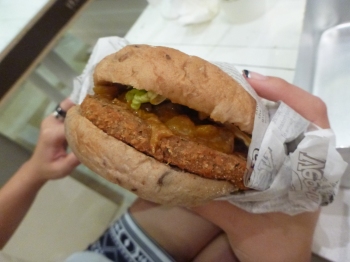 A piece of advice from tRP – stick to the Burgs at Vegan. The drinks, known as chillers, are really just syrup-drinks. Not recommended.

Rants If it could be a little more affordable, it may be a real great alternative to the unhealthy fast food restaurants in Singapore.

Will I return again? Yes, only because tRP spends most of the time working in town and sometimes a serving of healthy food do make one feel good! 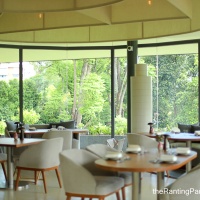