The Place With a good reputation of being one of the best Spanish Tapas restaurant in Singapore, it was a shame that we only managed to check out Esquina recently, which celebrated its fifth year anniversary recently. Located in a shop house setting along Jiak Chuan Road close to Chinatown and Outram Park MRT, this enclave houses some of the most popular restaurants in Singapore such as Burnt Ends and Restaurant Andre. The two-storey restaurant is filled almost every night, especially so for the seats at the bar table where you can catch the theatrical action in the kitchen. Keep a lookout for its head chef Carlos Montobbio, who has previously trainer under various Michelin-starred restaurants such as Roca brothers’ Celler de Can Roca (3 stars) and Zuberoa (2 stars) in Spain.

The Food It’s a small and big plates Modern Spanish Tapas concept here at Esquina, with prices ranging from S$8 from the Snacks menu to S$42 for the mains. From the Snacks section of the menu, we started with some fresh Tsarskaya oyster (S$7 each), topped with a nice hint of Jalapeño ponzu, and complete with salmon roe and pickled ginger flower. Even the Rantee who usually do not fancy oysters have his stamp of approval for this. 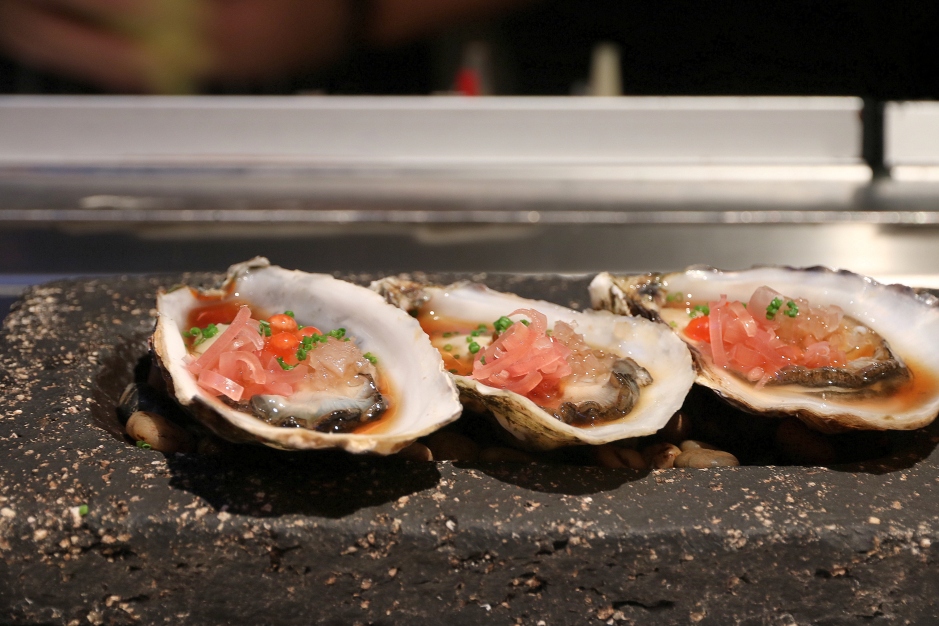 The Spanish Nigiri (S$6 each) is one of the must try on the menu for us. Cleverly disguised just like a Japanese sushi, it is in fact Bacalao brandade, which is essentially salted cod topped with roasted bell pepper which gave it the nice red hue.

The Chorizo Iberico croqueta (S$8) is a delicious bar snack in our opinion, which went so well with the piquillo mayo which gave it that extra tinge of spiciness kick.

From the ‘Soil’ section, we digged the Potato and black truffle gratin (S$20) with onion sauce, organic egg yolk and Iberico ham. The crispy texture of the pan-fried potato was well complimented by the slight saltiness of the ham, garnished with layers of luxe black truffle. 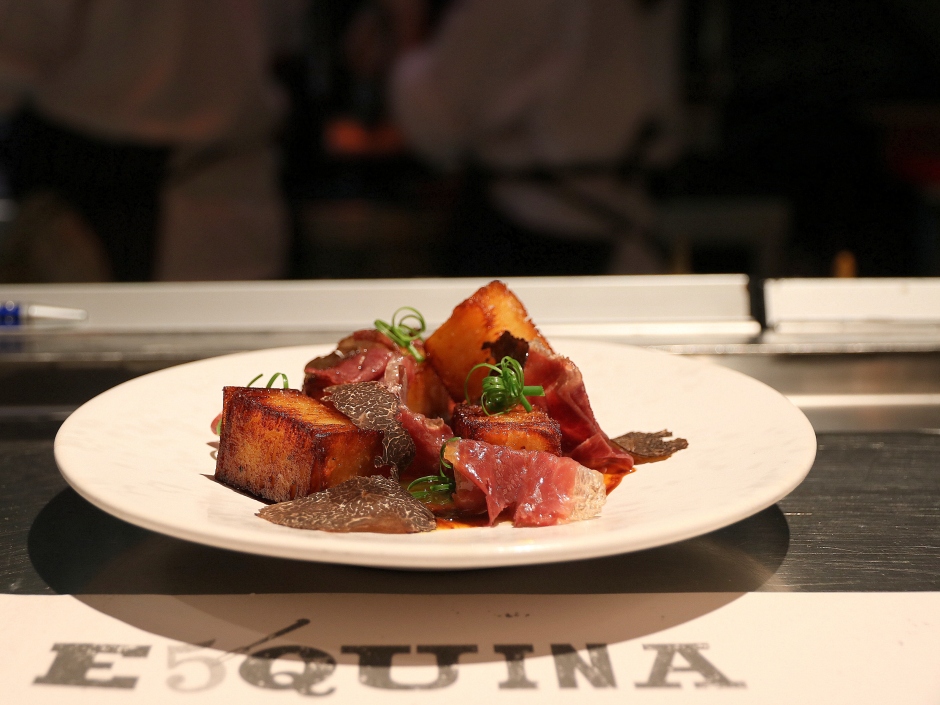 The bigger surprise however, was the Grilled baby romaine lettuce (S$12). This seemingly simple vegetable dish was delicious, largely attributed to the cider vinegar and herb yoghurt added. Moreover, who can resist the crunchy macadamia nuts?

From the ‘Sea’ section, one of the menu highlights is the Grilled Spanish Octopus (S$28). This succulent octopus tentacle dish is paired with Jerusalem artichoke puree, burnt onion and oyster leaf.

We also tried both the Pigeon (S$24) and Spanish Suckling Pig (S$42) from the ‘Land’ section. We preferred the latter, served with rhubarb and Apple chutney and mulled wine jus. It was an indulgent piece of fatty, sinful and delicious crackling skin. 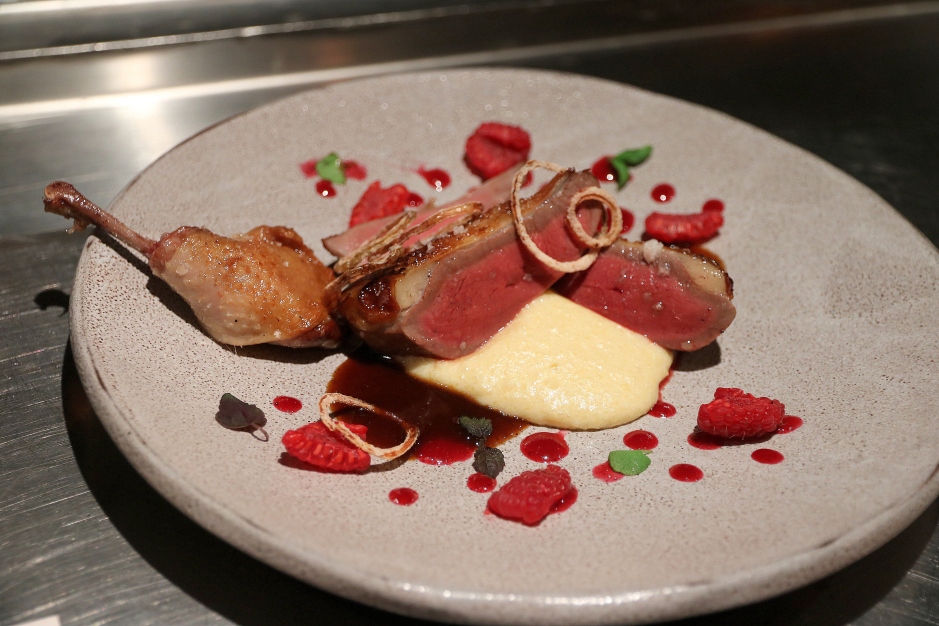 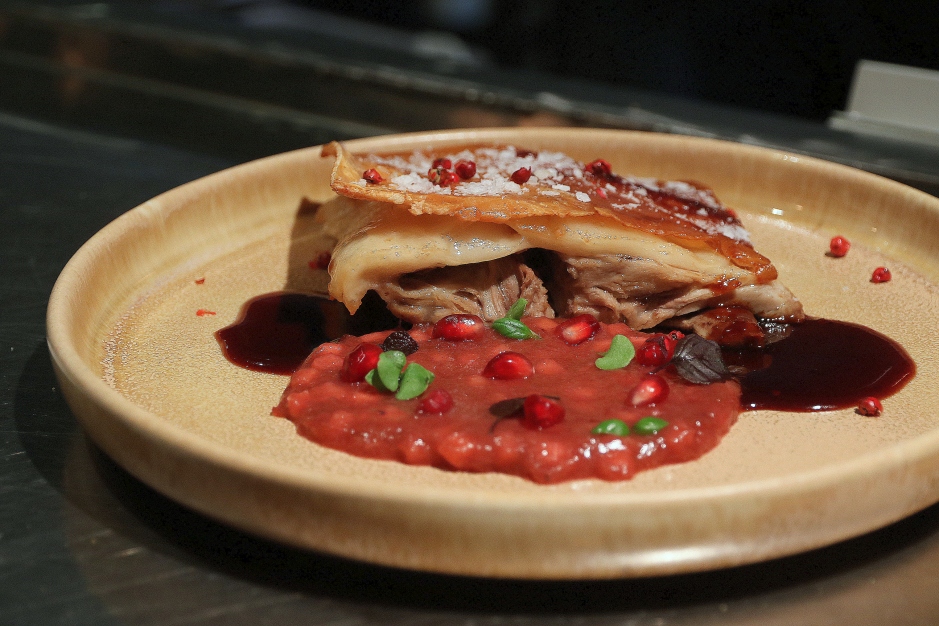 Before our desserts, we were served these really refreshing and palate cleansing cones of Sangria sorbet.

For desserts, we would say head straight for the BBC (S$15), which features different textures of banana served with beer ice cream and finished with warm caramel sauce. This was the most unique dessert item on the menu, which is unsurprisingly one of he highlights at Esquina. The beer ice cream was strangely refreshing, and it felt like a perfect conclusion to the good meal.

If you fancy a more orthodox option, we equally enjoyed the Warm chocolate fondant (S$15), served with malt ice cream. 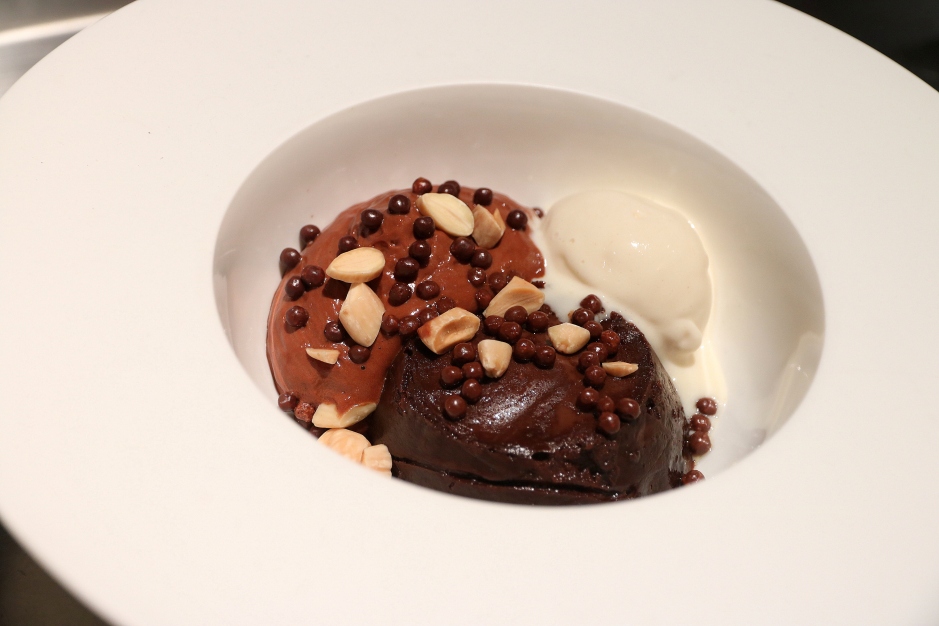 Rants It might be that we sat at the counter and witnessed the full action in the kitchen, some of the dishes were a tad greasy; something to note if you can’t take too much greasy food over a meal.

Will I Return Again? After our meal, we were reminded of our tapas meals back in Barcelona. Esquina exudes this unpretentious charm where we had some really good Spanish Tapas over a casual night. The reasonable prices also places Esquina at a good ground as compared to the surrounding restaurants. This is Michelin-worthy in our opinion. 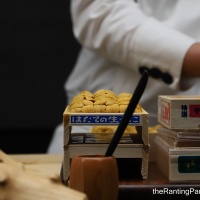