The Place Opened in mid-October 2017 at Intercontinental Singapore Robertson Quay, Wolfgang’s Steakhouse by Wolfgang Zwiener is one of the most anticipated steakhouse to open in Singapore in recent years. Hailing from New York City with numerous outlets worldwide including Tokyo and Hong Kong, this is Wolfgang’s Steakhouse first venture into Singapore at one of the hippest neighbourhood, Robertson Quay. The restaurant is opened by Mr Wolfgang Zwiener 13 years ago together with his son Peter Zwiener, where Wolfgang Zwiener himself had more than 40 years of experience at one of the best steakhouse in Brooklyn, Peter Luger, which we were fortunate to have dined before. 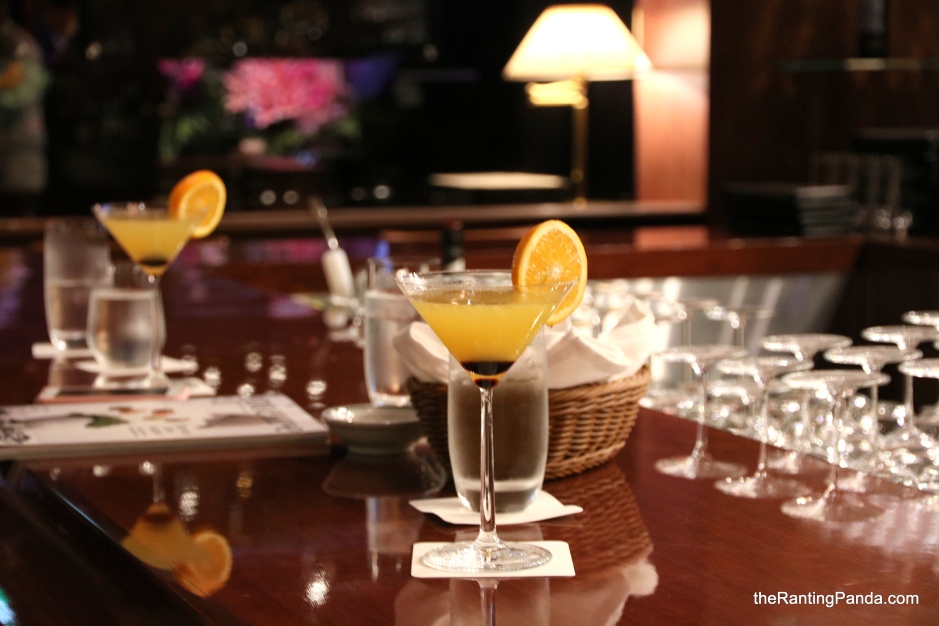 My first impression of Wolfgang’s Steakhouse Singapore is that I felt like I was transported back to a restaurant in New York City. The first thing to greet diners is the solid mahogany bar, where you can enjoy a couple of pre-dinner drinks to set the tone for the night. The dining ambience is classic old fashioned American vibe, with solid American walnut floors and imported Italian chandeliers. The main dining area is surrounded by full glass windows by the sides which give ample natural light in the day. 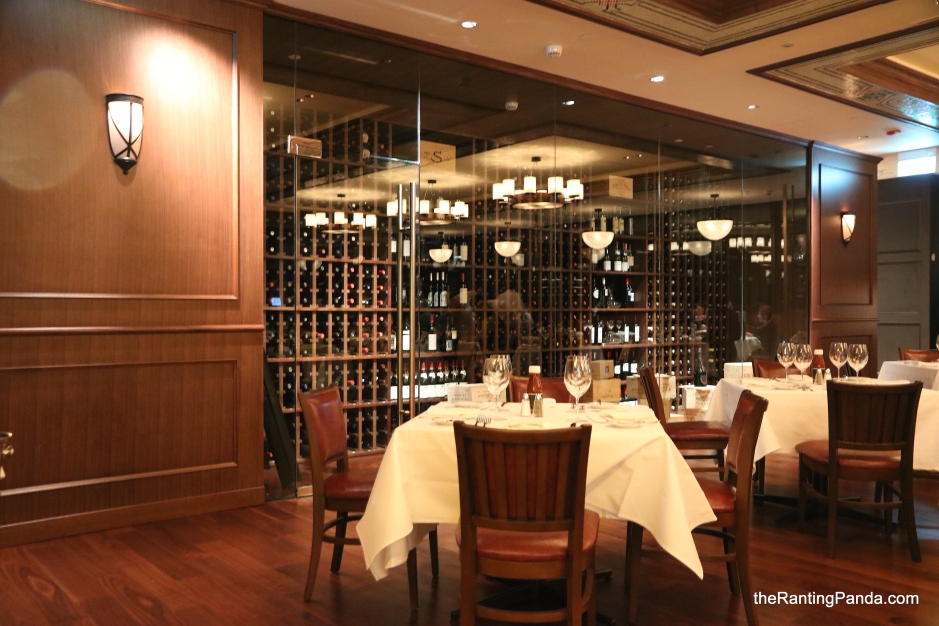 The Food If there is only one thing to remember from Wolfgang’s Steakhouse, the restaurant only uses USDA Prime Grade Black Angus beef, all dry-aged on site for 28 days. We learnt that this grade of beef only makes up about 2% of the beef supply in the US, hence I was extremely excited to try this cut. For appetisers, we started with the huge and fresh Seafood Platter (S$50) with Maine lobster, generous chunks of crabmeat and jumbo shrimps.

For salads, we tried both the Caesar Salad (S$20) and the Beverly Hills Chopped Salad (S$23). Probably a good idea to cleanse your body before the meat feast? 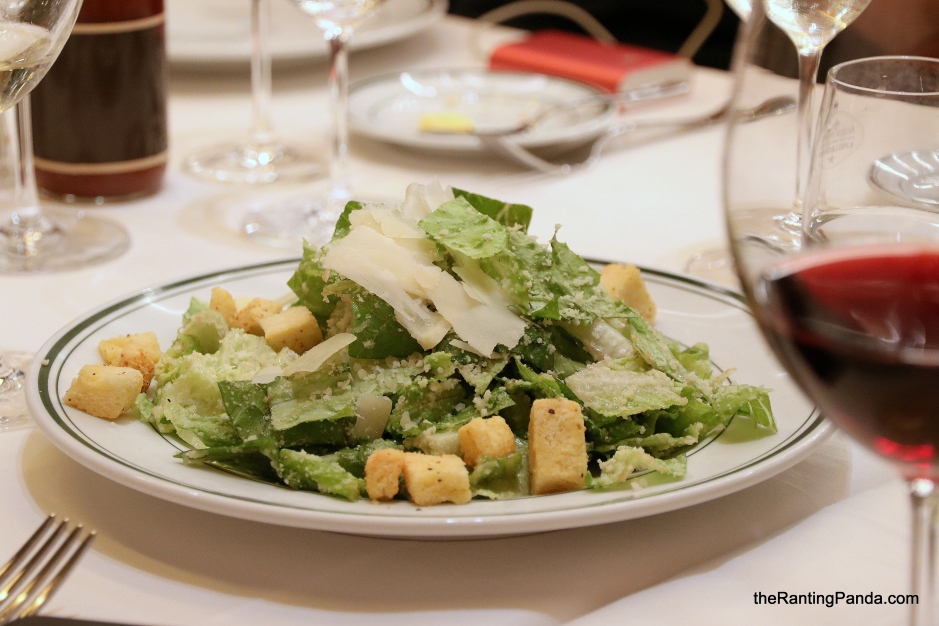 Now on to the main highlights of our meal, the steaks. The USDA Prime Grade Black Angus beef are aged on site to ensure the best quality and control of the meat. The main options on the menu are the classic and signature Porterhouse Steak (for Two at S$185, for Three S$275, for Four S$360), New York Sirloin (S$99), Rib Eye Steak (S$118) and Prime Filet Mignon (S$118).

The Porterhouse Steak (for Three) comes served in a hot plate where the meats were still sizzling when served to the table. There are two cuts on each side of the T-bone – Sirloin and Filet Mignon. Cooked till medium-rare, both cuts were very juicy with very god moisture retention in the meats. I definitely prefer the sirloin meat more for its more tender texture. That said, it is a very impressive plate of Porterhouse Steak as the flavours are very robust if you like your steaks this way. 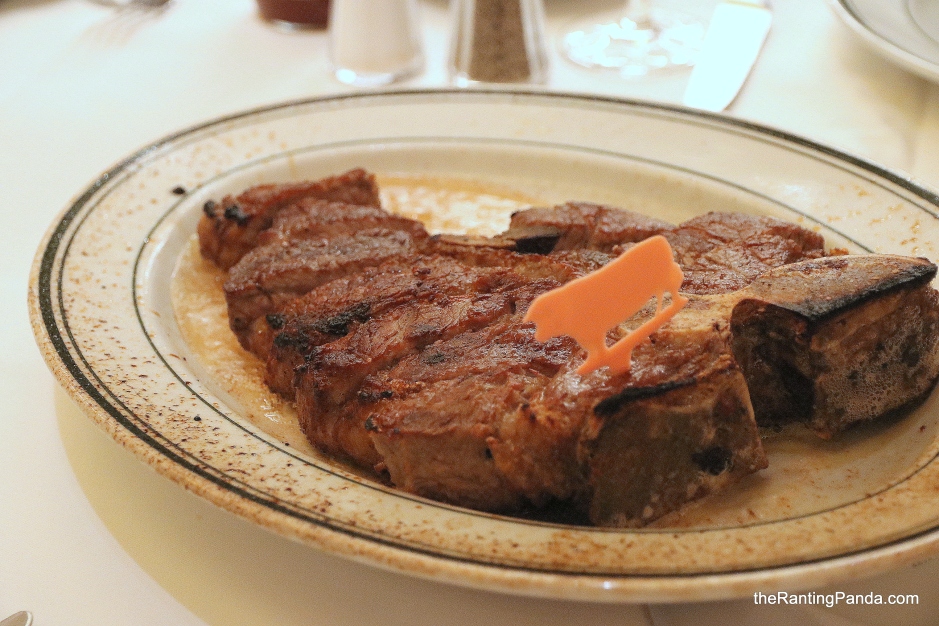 My favourite cut of the night? The Rib Eye Steak. From the precision cutting to dry-aging and high-heat cooking, the steaks here are prepared the traditional way according to the founder himself, evidently so from the succulent taste of the rib eye I had.

For desserts, the cakes are some of the must trys. A side note is that the dessert plates are served chilled here (where our meats are served with new hot plates), which is quite a rare ‘service’ in Singapore’s restaurants and it speaks volumes about the attention to details here. We tried the New York Style Cheese Cake (S$18), which has a very dense texture just like what we remembered cheesecakes to be in New York.

The Key Lime Pie (S$18) is easily one of the crowd’s favourite here which has just the right dose of zesty flavour. For something richer, go for the Chocolate Mousse Cake (S$18) complete with oreo-like bits by the side. I initially thought this would be too rich after a heavy and meaty meal, little to expect that the dark chocolate flavour to grow on me.

Rants Prices are relatively steep for desserts and the side dishes, though I think that the steak prices are priced quite competitively to other equal standing steakhouses in Singapore.

Will I Return Again? In all aspects, I see the old New York style dining experience in Wolfgang’s Steakhouse. From its interior decor to the service to the presentation of the food, it does remind me of Peter Luger in Brooklyn in some aspects, though Wolfgang’s Steakhouse is definitely much more polished and refined than Peter Luger Steakhouse. If you are looking for good quality American steaks, this is the place to try at least once. It is perfect for a meaty date, business lunch or simply a gathering with friends and family.

Checked out a new Omakase restaurant in Mohamed Sultan Road!
Go eat at Eat First! Steamed Fish Head is done with bean paste, and finished with the to-die-for pork lard! Just make sure you go early, as tables are snapped up by hungry diners when it opens for dinner sharply at 545pm daily. Come hungry!
Hokkien Mee from Zhen De La!
Zucchini Blossom Tempura?
This is quite good!
Sweetened Red Bean Soup with 50-Year Tangerine Peel!
Oh crab.
Can definitely do with this bowl of BCM now!
Dreaming of this Uni Cone!
Beef Noodles in Ang Mo Kio! Used to be better back during its heydays.
Hawker Centre Dim Sum at Marine Parade!
Have you come across Cod Chowder before?