The Place It took us this long to finally check out ADRIFT by David Myers located at the lobby of Marina Bay Sands hotel. The restaurant, which recently revamped part of its menu, has a gorgeous space. I was greeted by a long bar area as I entered, before my attention was being drawn to the tables right beside the window which cast a nice glow of the remaining evening light on the tables. 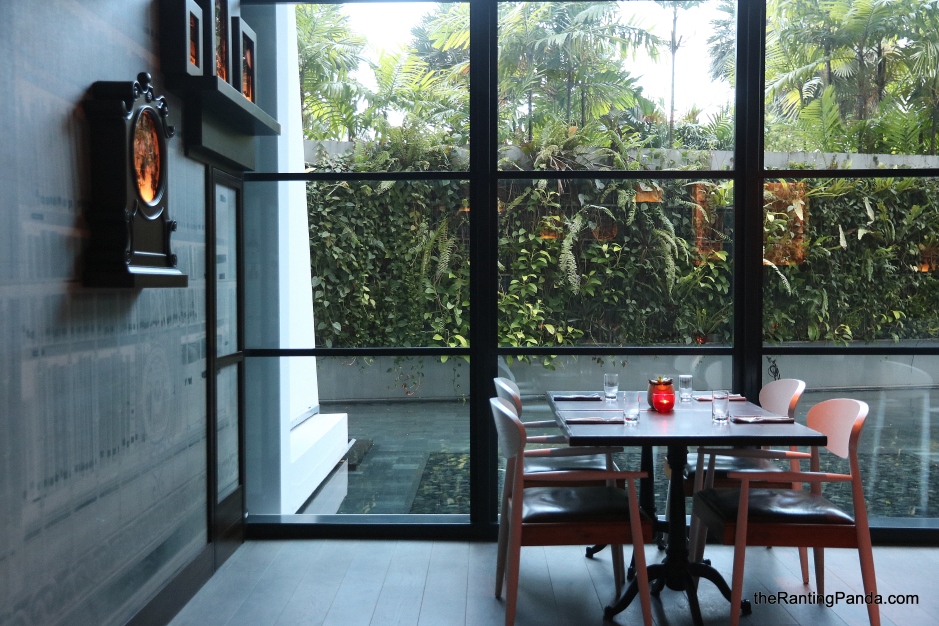 The Food With a modern take on izakaya style dishes, we are not surprised that the menu has quite a bit of Japanese traces, or other Asian influences.

From the Snacks section on the dinner menu, we started well with the Milliken Farms Sweet Potato Chips (S$12), an addictive snack served with the exotic avocado wasabi dip.

The Tempura Crab & Avocado Maki Roll (S$19) with green onion mayo is another must have if you love your Japanese Maki rolls like us. I enjoyed the crispy bits of the texture here, along with the unique green onion mayo sauce.

What’s an izakaya meal without some Yakitori? The Pork Belly (S$10/pair) skewer we had was delicious, to say the least. The tender and fatty meats were glazed with soy calamansi, lending it an interesting flavour.

Going healthy is probably not the way to go the moment I stepped into a bar, but that doesn’t stop me from getting some Tempura Vegetables (S$15). Served with grated daikon and ponzu sauce, the portion here is generous, consisting of the typical Japanese vegetable tempura such as sweet potato and eggplant. Each piece was fried to a crisp texture.

For mains, we went for the Maine Lobster Dumpling (S$36) and the Pistachio Crusted Big Eye Tuna (S$28).

The Maine Lobster Dumpling reminded us of ravioli, except that this version was uniquely soaked in chrysanthemum and mushroom sauce. It is quite pricey in my opinion for a few portions of the dumpling, and it is probably more value for money to order the Adrift Wagyu Burger & Fries (S$28) instead.

I chose to have the Pistachio Crusted Big Eye Tuna because of the coconut curry element, as well as my favourite Pistachio. While the Pistachio taste wasn’t particularly pronounced, I like that it gave the tuna that added texture. A for the coconut curry, this is probably the best part of the dish as the curry totally elevated the dish without coming across as overbearing.

For desserts, go for the Ice cream sandwich (S$12) if you can only have one. The sandwich is a nice mix of chocolate hazelnut, bourbon and candied bacon.

Rants We would have been mistaken about the serious looking demeanour of ADRIFT for the many occasions we have whisked past previously, little to realise that what lies beneath that cold facade is a chill-lax ambience and beautiful space.

Will I Return Again? If anything, we will return to ADRIFT for its charming urban chic vibes. Of course, you can’t go very wrong with the food as well.

Make your reservations instantly at ADRIFT by David Myers here.

So we ranted about our dining experience at @ClosPasoh last weekend on our IGS previously. For the full account, you can refer to the IG Post over at @TheChosenGlutton.
Comfort food, comfort meal.
50% off crabs?
Artisan Cake Rolls?
Super excited for this Läderach x L’éclair, especially when our favourite Swiss chocolate brand is involved!
Always up for a good meal at Paradise Teochew!
Delicious butter cake!
Our reward after a morning of hike!
Gyu Katsu Sando is always nice to have!
Really good plate of steak at @LesBouchonSG!
New cafe in the east!
Just some of the highlights we had at @JWMarriottSG Beach Road Kitchen Chefs-on-show “KONNICHI WOW!” Japanese theme buffet!