The Place We were really excited to have the opportunity to visit Hai Tien Lo recently, the award winning Cantonese restaurant at Pan Pacific Singapore, which is now located at level 3 of the hotel after its massive revamp. The grand entrance of the restaurant made us feel like we were entering a private lobby, which is nothing short of class and grandeur. Another reason for our excitement this time round is the launch of “A Glorious Decade – Six course menu” to commemorate Hai Tien Lo’s Master Chef Lai Tong Ping’s ten years in the restaurant. We could not help but applaud the restaurant’s effort in creating this special six course menu to showcase Chef Lai’s culinary prowess, as well as the celebratory symbolism for Chef Lai in this crafted menu.

The setting of Hai Tien Lo is very cosy, with private dining cubicles for larger groups of diners. There are also a couple of private rooms for a more intimate dining ambience or business lunches.

The Food The special six course menu captures the essence of Hai Tien Lo, by showcasing ten items of Chef Lai’s specialities. Priced at $108++ per person (minimum two diners), this celebratory six-course menu is available till 31 December 2014. We were fascinated by the creative names of each dish from the starter to the dessert as we were browsing through the menu, which whetted our appetites even before the food was served.

The first dish wowed our senses instantly. Aptly named Prelude to Gastronomy Discovery, it consists of the Braised Homemade Beancurd with Minced Pork and Pine, Sliced Barbecued Duck and Shredded Jelly Fish and Crispy Prawn in Sesame Sauce. The homemade beancurd left the greatest impression on us, as it is made entirely from soy beans, and prepared in a broth of chicken, turkey and bacon for eight hours. We were also madly in love with the peking duck, which is rich in flavour and sweetness as it was prepared coating the skin with malt sugar for six hours before roasting. As for the crispy prawn, we really enjoyed the flavour with the sesame sauce coating. The great lengths taken in preparing each dish was amazing. And this is merely the beginning. 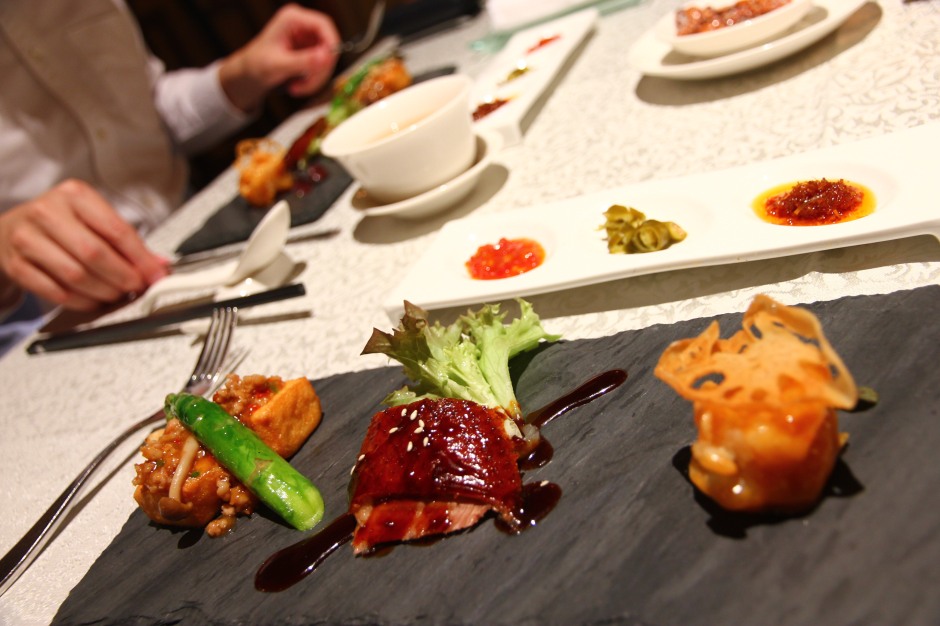 We love soups, especially Chinese soups as there is usually so much goodness. The second dish we had was the Braised Fish Maw with Dried Scallop in Supreme Chicken Stock, with each ingredient reminiscent of flavours Chef Lai grew up with. The chicken stock taste was rich enough, and this was made even better the sweetness of carrots, as the chicken stock was boiled with carrots for eight hours, giving the soup a wholesome flavour. We have to specially mention the fish maw as well, which takes up to two days to prepare and braise.

The third dish was quite unique in the sense that it was Sea Perch prepared in two different ways – steaming and frying. The steamed Sea Perch fillet showcased the oriental way of preparing the dish, with the sauce created by steeping minced onions and garlic for six hours for the flavours to fully develop. It was topped with Green Minced Onion Sauce, which was so good. I remembered finishing all the sauce even without the fillet to go with.

The Deep-fried Sea Perch offered a vastly different flavour, coated with Champagne sauce. We are probably more traditional and oriental at heart, as we much preferred the steamed version. 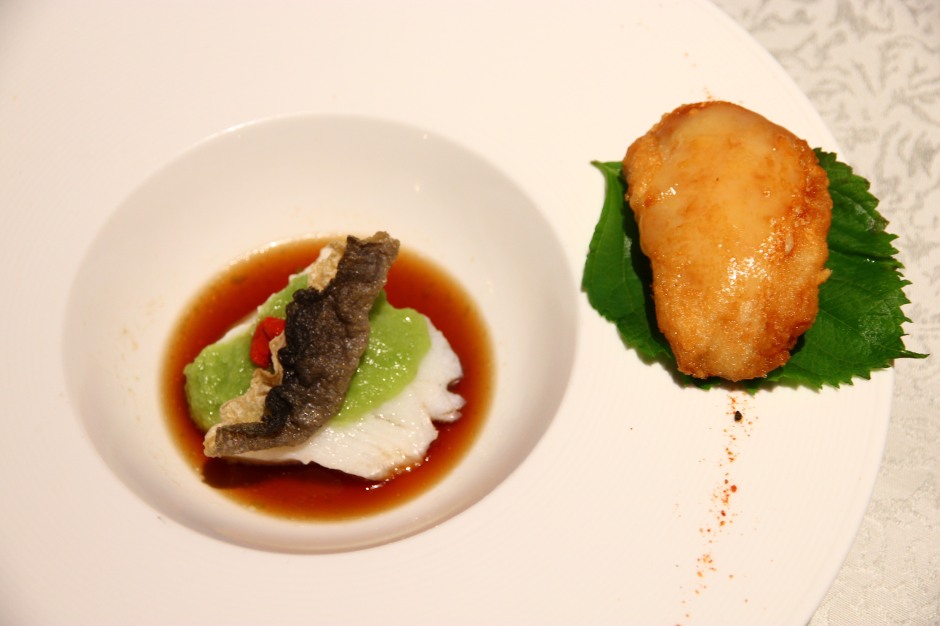 There are so many ways to cook Pork and it might seem like a relatively easy dish to prepare. Before trying the Braised Pork Ribs, it seemed like we have already expected the taste of the dish. However, the first of this version was such a strong explosion of flavours which was prepared painstakingly. The pork ribs was marinated with Chinese herbs for two hours, and then braised for four hours subsequentl to give its tender texture. The fried bun was also an interesting element of the dish which blended well with the sticky sauce.

Initially,we was expecting the usual fried noodle, not knowing that the dish was fish noodle which is quite rare these days. We were even more surprised by the presentation of the dish, where the wok fried fish noodle was wrapped in paper. The friendly service staff explained to us that it was reminiscent of the old way of eating noodles, which we agreed that it created a more 古早味 (traditional) feeling. The fish noodles was fried with sea cucumber and thick slices of scallop, making this dish a true bag of sea treasures. We chatted with Chef Lai to find out more on the way this dish is prepared. Chef Lai shared with us that the fish noodle is naturally more salty in flavour, hence he balanced the overall taste of the dish with the scallop and sea cucumber.

The last part of the meal was a special selection of three handcrafted Chef’s signature dessert – Mango Sago, Osmanthus Jelly with Wolfberries and Avocado Cream. The vivid colours of the three items reminded me of a Japanese Kaiseki course, where colours are usually used to enrich our visual sense. The Osmanthus Jelly left a deeper impression on us at the end of the meal, due to its fragrant floral flavour after boiling for two hours with osmanthus flowers. 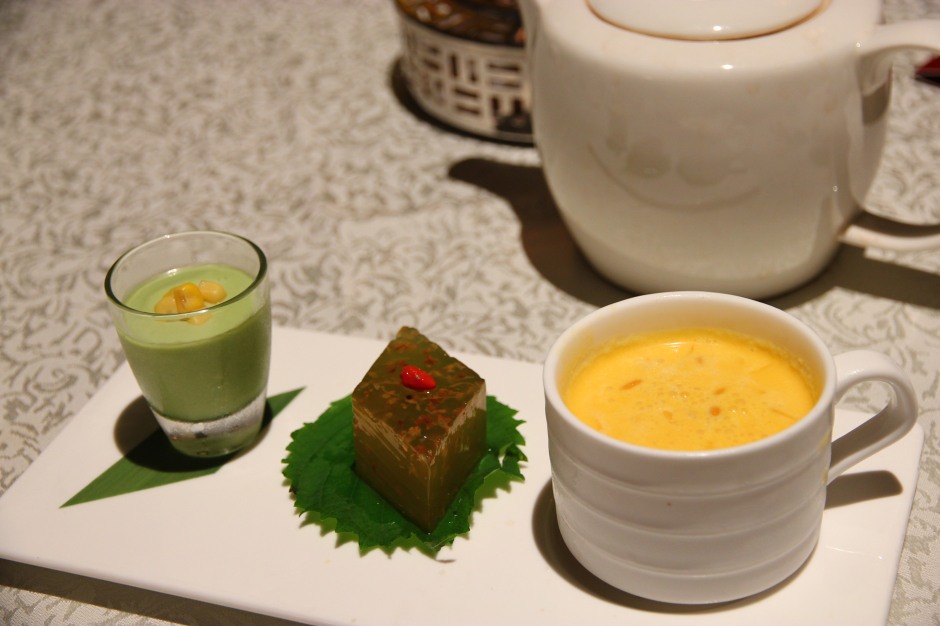 Rants We had a very pleasant dining experience at Hai Tien Lo, with a service standard nothing short of impressive. It would have been perfect if all the service staff are able to speak Mandarin, given that this is a Chinese restaurant, but we also understand the current labour crunch on the F&B industry. That said, we were served by an extremely knowledgeable service staff by the name of Ms Bonnie, which went the extra mile by explaining each dish to us once it was served.

Will I return again? We daresay that Hai Tien Lo is probably one of the best Chinese Restaurants around in Singapore, with its impressive quality and offerings of Cantonese dishes. Now we can’t wait to try the dim sum selection here, which is available everyday during lunch hours.

Back at the @Hilton.Singapore this weekend for its new New Prosecco, Seafood & Valrhona All-Chocolate High Tea Staycation!
Get in my belly!
Korean style Zha Jiang Mian?
Take a pick!
Chicken on fire!
Chefs-on-show “KONNICHI WOW!” Japanese theme buffet from @JWMarriottSG Beach Road Kitchen!
The champion of bolo buns?
The next time you are in Jurong and need a coffee spot.
So we ranted about our dining experience at @ClosPasoh last weekend on our IGS previously. For the full account, you can refer to the IG Post over at @TheChosenGlutton.
Comfort food, comfort meal.
50% off crabs?
Artisan Cake Rolls?