The Place Jiang-Nan Chun is no stranger to people who are familiar with Chinese restaurants in Singapore, being an established Cantonese restaurant at Four Seasons Hotel Singapore. Located at the second level of the hotel, the restaurant interior is reminiscent of a modern palace, from the palace gate lookalike grand entrance to the Chinese style partitions within, it is really tastefully done. And we are about to share that this applies to the food as well.

The Food From now till 31 January 2015, Jiang-Nan Chun has launched the Food in Literature Series: Four Beauties 四大美女养身套餐 five-course set at $148++ per person, on the notion of nourishing the body and skin. The “Food in Literature” dining concept has been ongoing for the past two years as well, inspired by Chinese classics Journey to the West and  Dream of the Red Chamber previously.

I was intrigued by the whole concept of designing a set course with the four ancient Chinese beauties in mind, so let me share the brief tale behind each dish I had, from the starter to the mains to the desserts as each dish was painstakingly conceptualised jointly by the talented Restaurant Manager Ng Chong Kim and Executive Chef Alan Chan.

The story and meal begins with the Scent of the Heavenly Beauties Combination Platter 国色天香四美图, with four starters to depict each of the four beauties, namely Yang Guifei, Xi Shi, Wang Zhaojun and Diaochan.

I was recommended to start from the refreshing Chilled Cherry Tomato with Lychee Martini Water, where cherry was Yang Guifei’s favourite fruit which the Tang dynasty emperor would go to great lengths to feed her the best lychee. One of Jiang-Nan Chun specialty is dim sum, which the Steamed Seafood Dumpling was showcased here to represent Xi Shi, whom inspired the name of the West Lake in Hangzhou. For Wang Zhaojun, the Deep-fried Shrimps Paste with minced Mushroom “Pipa” Beancurd was a subtle tribute to her favourite Chinese Pipa instrument. My favourite of this platter is the Chilled Foie Gras with Osetra Caviar to symbolise Diaochan, as the Foie Gras was simply delicious.

Our second course was the 贵妃醉舞华清池 Dance of the Double-boiled Soup, one of the specialties at Jiang-Nan Chun and very popular among its regular customers. Apparently, Yang Guifei used to indulge in shower baths, as symbolised by the clear soup. The rich soup, thoughtfully heated over warm fire, was a generous combination of premium ingredients such as abalone and sea turtle which I reassure would leave you craving till the last bit. 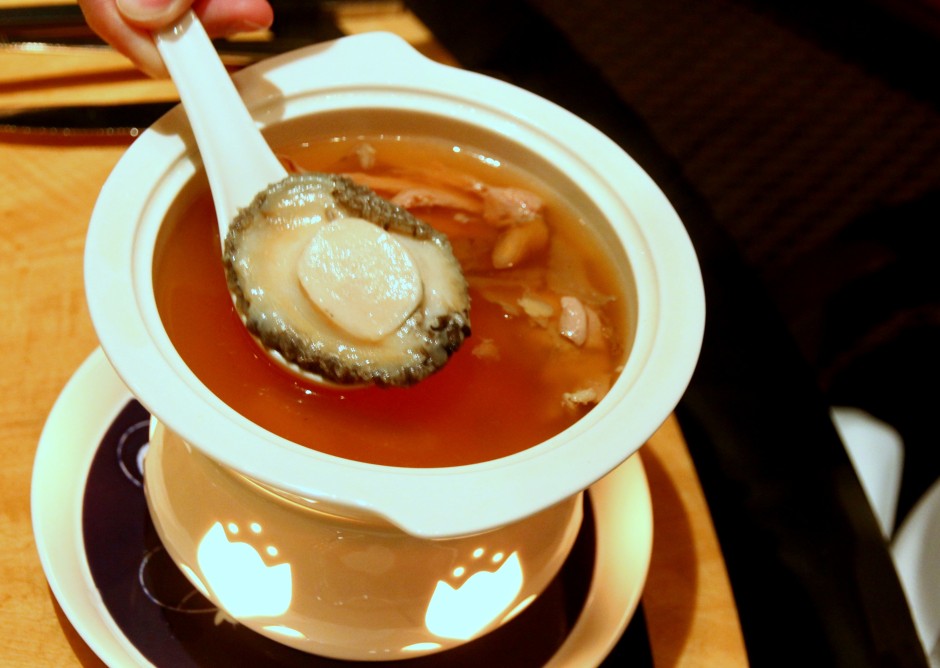 The next dish to portray Xishi was the 浣沙俪影赛鱼儿 Aquatic Reflections of Beauty Fish Poetry from Atlantic Cod Fish. The inspiration for this dish came along as Xishi was rumoured to be so mesmerizing that she caused fishes to sink themselves as they shy away from her enchanting beauty as she washed her dress by the lake. The fresh cod fish, combined with the deftly created sea of fine spring roll skin, was nothing short of impressive. 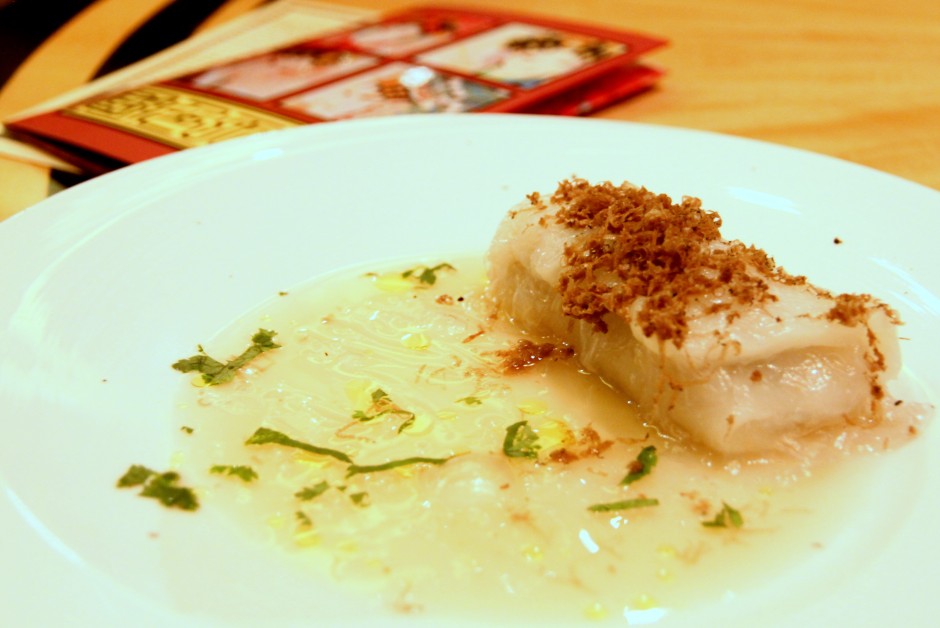 曲琵琶忆乡思 Song of Lingering Memories Pipa Chicken, is to showcase the third beauty Wang Zhaojun, who was a self-sacrificial political bride in a bid save her homeland. Aptly named Pipa Chicken after her favourite musical instrument, this dish also epitomises one of the most famous Hawker fare in Singapore, with the distinct red chilli sauce, succulent roasted chicken and chicken rice. The commendable effort in the dish was undoubtedly the Crispy Chicken Rice Ball, which had the fragrant chicken rice encapsulated in the crispy rice ball. 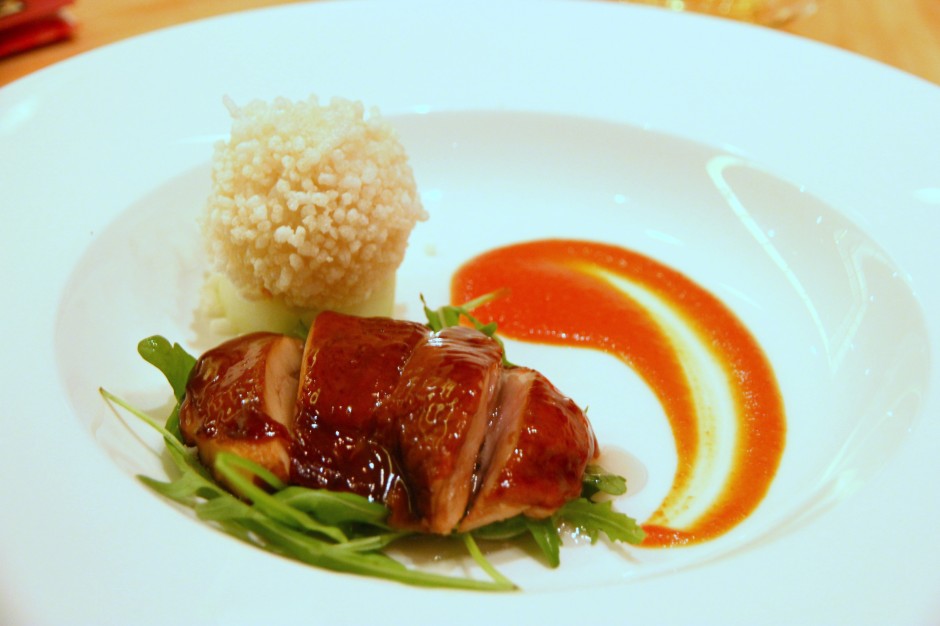 The finale of the set course was the 惊鸿一梦镜花情 Dangerous Liaison Dessert, to signify the fourth beauty in this beautiful gastronomic journey thus far, Diaochan. Paired with black and white sesame with superior bird’s nest and crispy salted egg yolk crust with almond cream, this dish was creatively designed to depict the internal struggles Diaochan encountered as she was used as a political tool to sow discord between a brutal warlord and his son during the warring period. The almond cream was skilfully frozen to the right degree before it was fried in salted egg yolk crust to give it the optimal fluid texture. 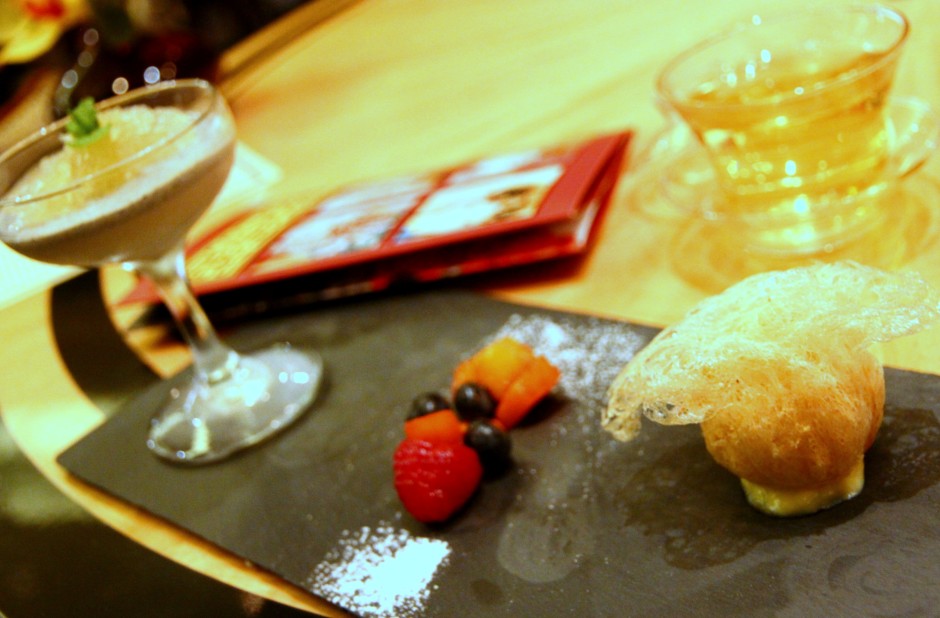 My favourite portion of this dessert platter was the sesame with bird’s nest, an absolute indulgent treat which was visually appealing as well.

Will I return again? Every dish of this special Four Beauties Series hit the right notes, which left me nothing short of impressive by the great detail displayed in creating each dish. It was my first visit to Jiang-Nan Chun, but I am sure it won’t be the last.

Go eat at Eat First! Steamed Fish Head is done with bean paste, and finished with the to-die-for pork lard! Just make sure you go early, as tables are snapped up by hungry diners when it opens for dinner sharply at 545pm daily. Come hungry!
Hokkien Mee from Zhen De La!
Zucchini Blossom Tempura?
This is quite good!
Sweetened Red Bean Soup with 50-Year Tangerine Peel!
Oh crab.
Can definitely do with this bowl of BCM now!
Dreaming of this Uni Cone!
Beef Noodles in Ang Mo Kio! Used to be better back during its heydays.
Hawker Centre Dim Sum at Marine Parade!
Have you come across Cod Chowder before?
A quick breakfast before workout!