The Place Despite just being eight years since it first opened along Carpmael Road, British Hainan offers the retro chic vibe with 2 themed rooms, one focusing on the colonial English and the other with a Communist China theme. Tastefully done, British Hainan does not come across as overly cliche with its decor.

Understood from the wait staff that the owner’s intent is to recreate and provide a place for locals to enjoy the authentic Hainanese food during the early days of Singapore’s founding when many Hainanese cooks were working in British homes. The group has since opened 2 more outlets of British Hainan in Bugis and Kallang district.

The Food We are all familiar with the more commercialised Han’s with its 20-odd outlets islandwide, British Hainan also focuses on Singapore heritage Hainanese cuisine. But the similarity stops there, with British Hainan having a stronger emphasis on food quality and overall dining experience.

On the menu, you will find traditional Hainanese food such as mixed Curry Rice and Hainanese Ngoh Hiang. And you should not miss the main highlights here such as the Oxtail Stew, Beef Stewed and the British Hainanese Pork Chop.

Glad that I decided to give the Traditional Hainanese Oxtail Stew (S$29.90) a try. Stewed for more than 6 hours as the staff informed us, this is a favourite amongst regulars here, and I can fully understand why. The tender meats with the luscious stew makes this a perfect soul food. The carrots and potatoes are boiled till soft, with bread dipped into the sauce for you to soak up the satisfying stew!

The Hainanese Pork Chop is to die for, with a crispy crust and a juicy meat, one of the best I have had in Singapore.

Of course, you can opt for the Hainanese Pork Chop Pasta (S$14.90) too, where you get a larger serving of the signature pork chop here. The tomato-based pasta is done al dente, and the portion is huge! The restaurant is very generous with its portions.

I also decided to give their Herbal Mutton Soup (S$30 for 1pax portion) a try, though have to warn that the meats are rather gamy, and the herbs are really punchy. Am usually good with mutton, but this was a tad too overpowering for me. Though if you like the intense flavour profile, this might just be the soup for you.

Rants The group has since opened 2 other branches at Kallang and Bugis area, moving a tad more commercialised  than the rustic feel at this Joo Chiat branch. Hopefully, its authenticity will not be lost amidst its expansion.

Will I Return Again? Yes, and in fact I have returned and brought my folks to check this place out again since. Love the Oxtail Stew I had, and you should as well. Escape Singapore by visiting British Hainan. 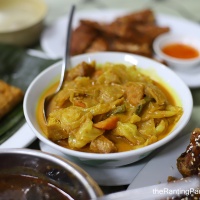