The Place Located in the centrally located Regent Singapore hotel near Orchard Road, Summer Palace is one of the most authentic award-winning Cantonese restaurant in Singapore helmed by Executive Chef Liu from Hong Kong. Set in traditional Chinese style décor, the restaurant exudes an old Hong Kong vibe yet a modern touch at the same time, which I was very impressed on my first visit. I like how spacious the restaurant feels, with a cosy and intimate dining space which is ideal for family gatherings or an intimate catch up with friends. There are also two private dining rooms, ideal for business lunches. 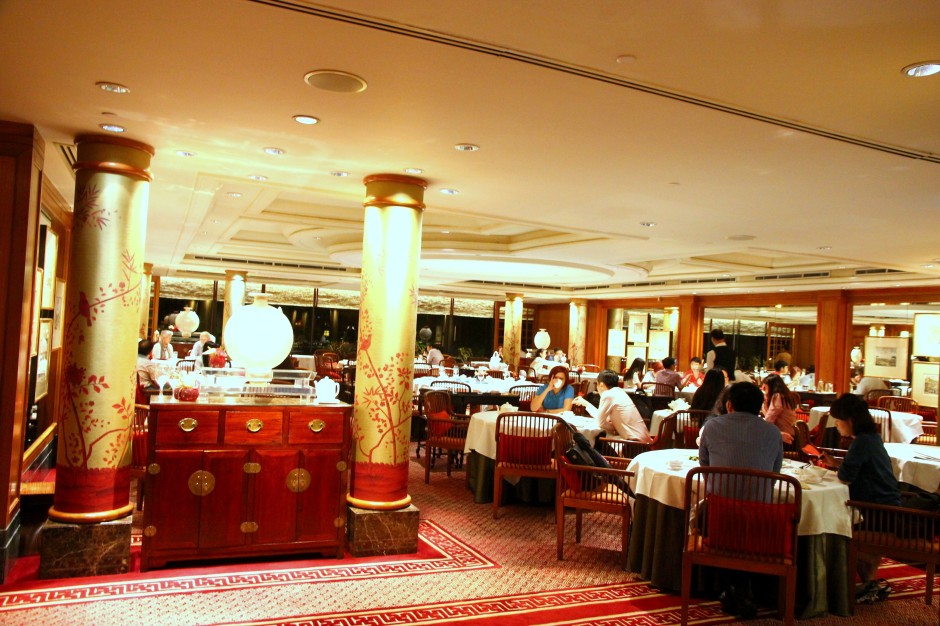 The Food Other than the traditional Cantonese classic dishes on the menu, Summer Palace has launched its special claypot rice menu this Winter season, available from now till 31 January 2015. We were really excited to try it, especially after hearing that there are some fairly exotic flavours for selection other than the traditional assorted meats flavour.

For a good start, we had the Fried Fish Skin with Salted Egg Yolk ($18). The fried salmon skin was fried to a light and crispy texture, coated with the right degree of salted egg yolk, which was very impressive. I had many versions of this dish before but most failed to strike a good balance with the salted egg yolk, to the point where it totally masked the taste of the fish skin. This was so addictive which got us popping non-stop. 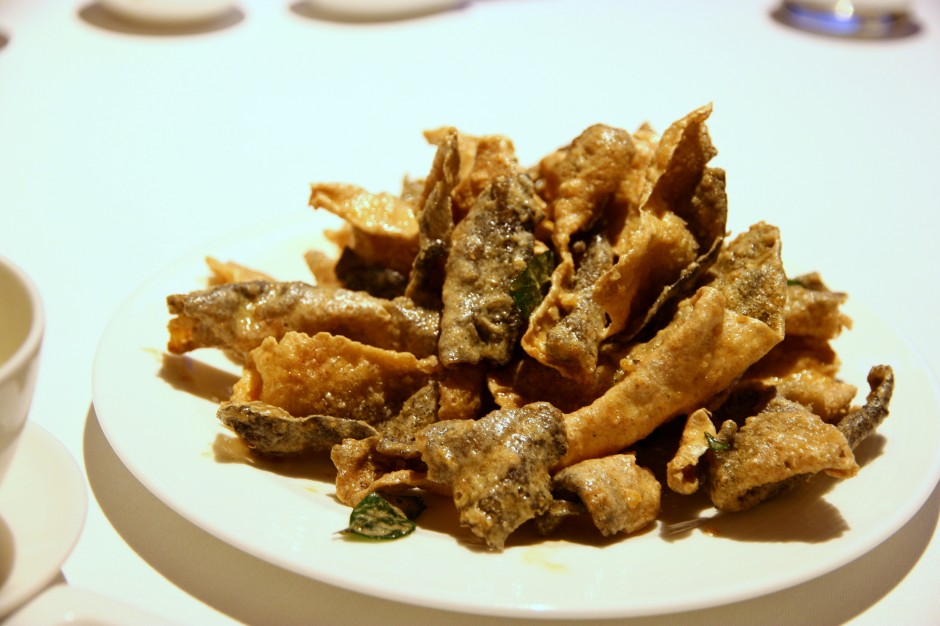 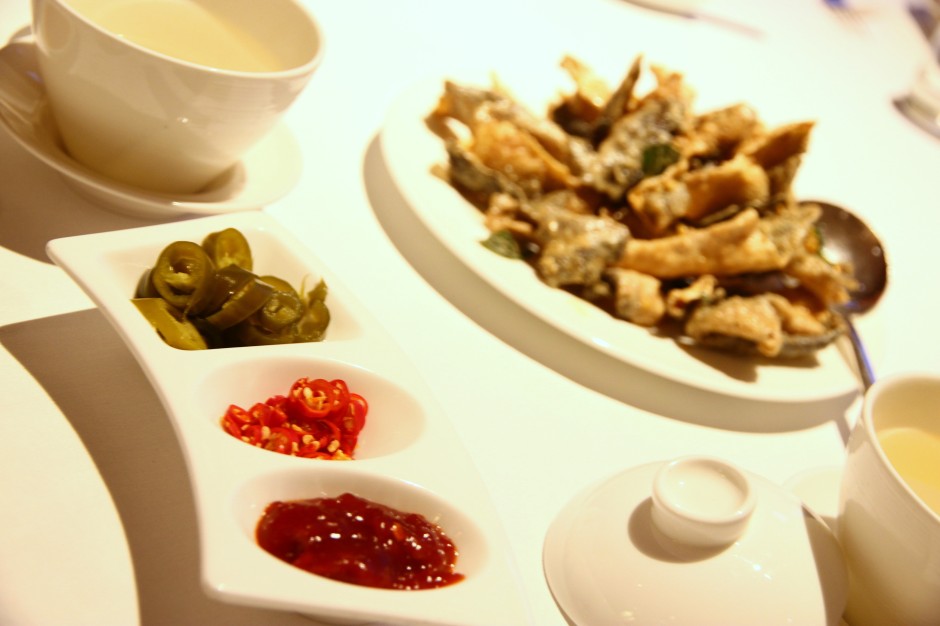 It is a must to try the soup in every Cantonese restaurant, which I tried one of the Chef’s specialties at Summer Palace. The Double-boiled Sea Whelk Soup with Chinese Tonic and Fish Maw ($28) was loaded with heaps of precious ingredients for a thick soup texture. 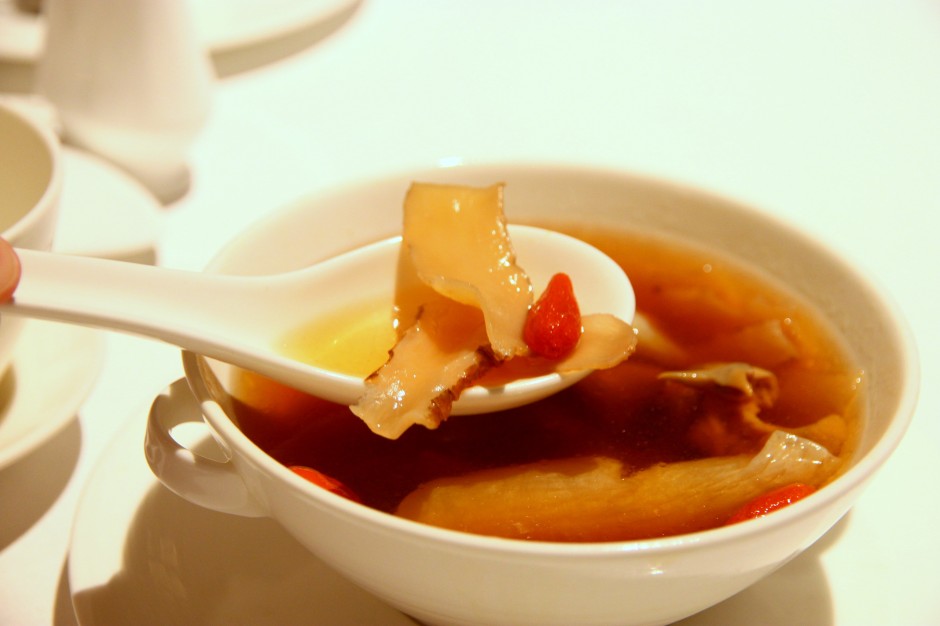 For the highlights of the claypot rice menu, we simply have to try the Chef Liu’s hometown rendition of the traditional Flavoured Assorted Preserved Meat Claypot Rice ($68, serves 2 – 4 pax). It was a visual treat for us the moment the preserved meat was served separately, before the friendly and knowledgeable service staff mixed it with the claypot rice. It was a good mix of preserved meats which added a varied taste to the fragrant rice, from air-dried Chinese pork and liver sausages to waxed duck and preserved pork belly. I would recommend adding some soy sauce as well for an even more flavoured taste. 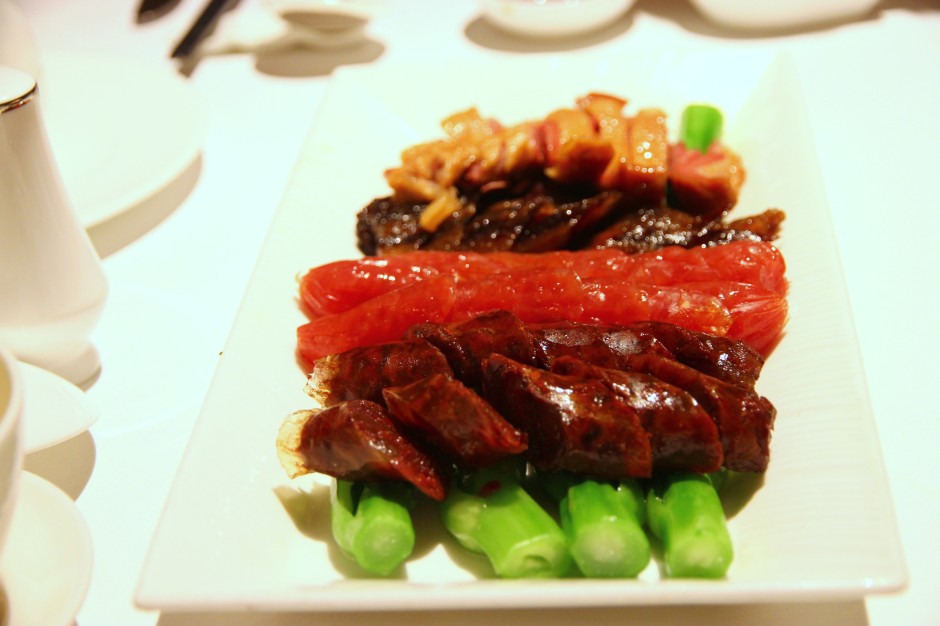 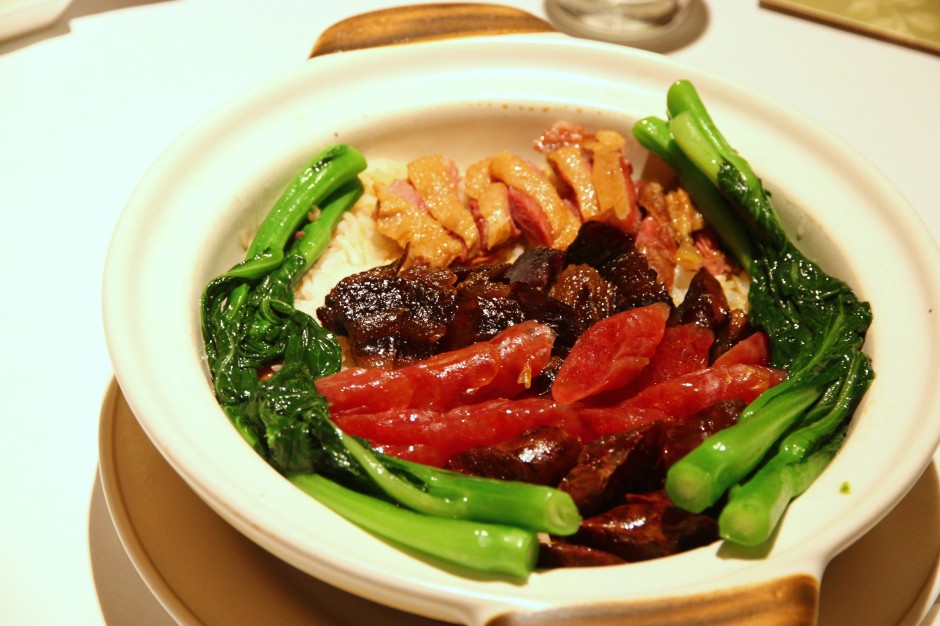 For fans of seafood, we would recommend having the Lobster with Ginger and Onion Claypot Rice ($138, serves 2 – 4 pax). This lobster version was no doubt one of the most lavishly decorated claypot rice I have ever had. The freshness of the lobster was definiely the best part for me, not forgetting the chef’s skills in preparing it as well. 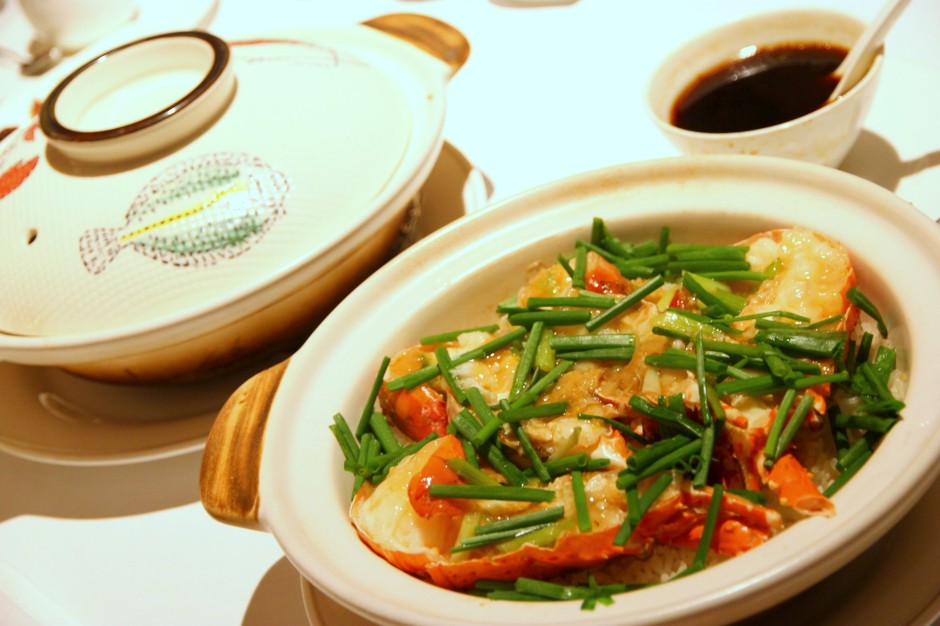 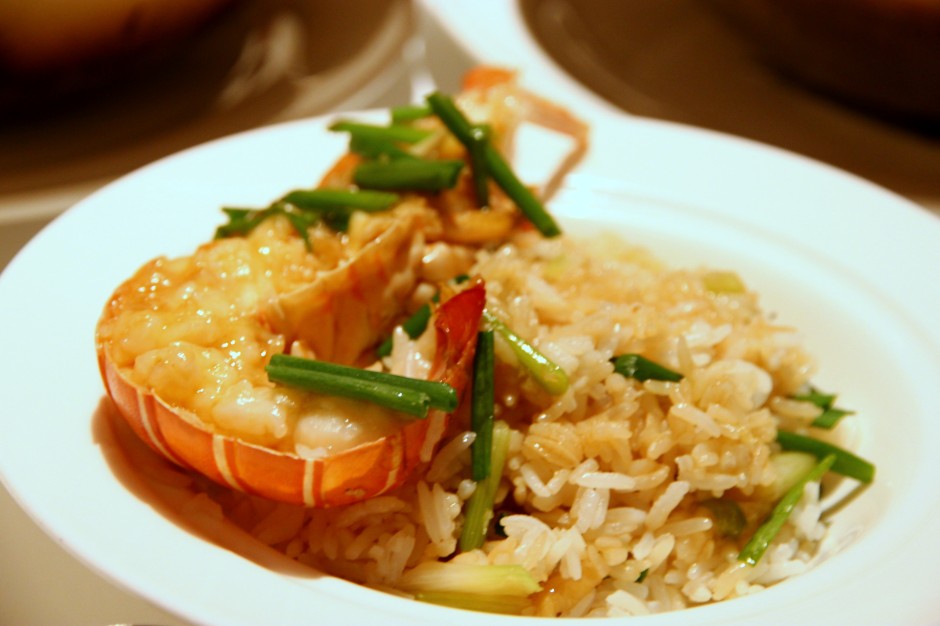 After our hearty feast, we were recommended to end off with one of the popular favourites at Summer Palace, the Chilled Lemongrass Jelly with Aloe Vera in Lime Juice ($8). It was not at all exaggerating to describe this treat as palate cleansing, as it was truly refreshing with the right amount of sweetness for me, given my relatively low sugar tolerance. 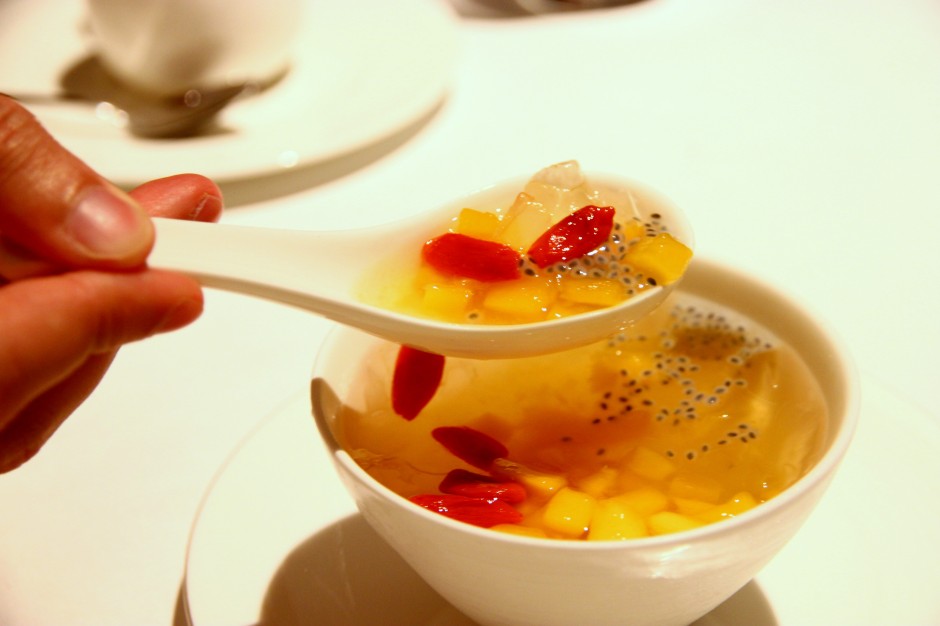 Will I return again? I know I can trust on Summer Palace for a good Chinese meal in future, after having experienced its creative juices behind a traditional dish such as Claypot Rice. The service was personable and professional as well, which is something I cannot take for granted in Singapore. I am already looking forward to my next meal here.

When normal Chendol doesn’t satisfy, there’s Durian Chendol! This dessert from the new Blue Ginger at Great World City uses D24 durian and as you can imagine, it is intense.
Scrambled eggs, wagyu beef patty, cheese, and milk bread toast. Sign us up for it!
Salted egg chicken is one of those Zichar dishes we can’t resist!
BCM the other day at Tai Wah in Hong Lim Food Complex. Lunch hour is insane, so we usually make a point to head there after 6pm while it is still opened.
We love a good foie gras dish, and the Foie Gras Poêlé from the new menu at Brasserie les Saveurs doesn't disappoint. You get a rich and well pan-seared Foie Gras served along with Poached Apple and Gingerbread Coulis.
You may be thinking, what’s that black stuff! Our surprise favourite dish at The Blue Ginger’s second outlet in Great World City, this Sotong Keluak is a must try! We are not big squid lovers, but once the squid is coated with buah keluak (a special type of black nut from Indonesia) paste, wow. This dish goes extremely well with rice too, so ditch the keto-diet.
Because it’s Lao San! Been awhile since we had it so here we are. Satisfaction is when you get your orders in within 10 minutes (faster than certain fast food chain), and we miss this taste!
Our first time having Beauty in the Pot at home! It is a good option if you are concerned about crowds during this period. We ordered the takeaway option for the Beauty Collagen Broth, and there is a minimum order of $28 worth of ingredients for takeaway in addition to the soup. Honestly, we were also pleasantly surprised by the great lengths the team went to prepare the takeaway such as giving ample soup refills in nicely packed and reusable containers, all packed in a big takeaway insulator bag which is also reusable. Otherwise, if you have bigger groups at home, there’s also the option of the Beauty in The Pot catering service with full set of crockery and hotpot provided. Catering menus start from $238 for 5 persons.
That skateboard which doubles up as a table! White coffee, black coffee? Just have both. Checking out the few weeks old Double Up Coffee near Bugis, and we love the raw and bare industrial look!